Posted on March 4, 2013 by sisterparishinc

[Throughout the year, we’ll be posting periodic reflections from Sister Parish community members in honor of our 25th Anniversary. In today’s reflection, our founder Vicki Schmidt looks back on the early years of Sister Parish. Vicki founded Sister Parish with Dick Fenske in 1988. Her parish Faith Lutheran Church, of West Fargo, ND, is in a sistering relationship with Tierra Nueva I in Guatemala City.]

Chronos and kairos are two Greek words that shed light on the way I understand life.  Chronos time sets us on linear movement through life, as in chronology, in that events and situations take place in predictable ways and follow in a logical manner. Kairos moments are those which break into our ordered chronological timeline, unsuspecting, disrupting, and shaking us out of ordinary time into new possibilities that forever change us.

Sister Parish, Inc. is all about kairos times.  My first invitation to experience life in Central America came from my bishop in 1984, because he knew of my work with refugees and the trip included visiting a refugee camp in El Salvador. I was active in resettling refugees at the time and knew the time in a refugee camp would offer new insights about why people flee from their homelands to become citizens without a country.

As I traveled  in Mexico, Nicaragua and El Salvador on that trip, my life was daily re-formed and transformed.  I “morphed” into a new being, as if I was walking one way and did an about face to move in new and challenging directions. Kairos.  How do I understand how this happened?

Multiple concerns nearly stopped me from making the trip.  Leaving three preschool  children behind, and spending money not in our family budget were issues I had difficulty reconciling.  During the debate with myself whether or not to go on this trip, a sixteen-year-old boy presented me with the money to make the trip.  Unbelieveable!  Sixteen-year-olds don’t usually have that kind of money, and  certainly wouldn’t just give it away!  It was a sign for me to go.  Indeed, kairos.

That wasn’t a stand alone happening, however.  I participated in a national Lutheran social ministry event in Miami, Florida, after my travels to Central America.  I took the place of my husband, who was slated to attend.  It was there Dick Fenske and I met in a small group discussion about refugees, and instantaneously we began the walk together that eventually opened the door to the organization of Sister Parish.  Being in that group with Dick was kairos. 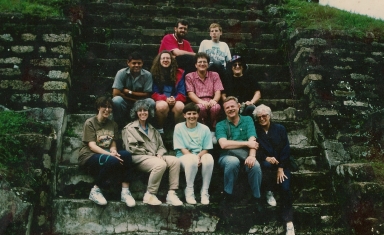 One of Faith Lutheran Church’s early delegations to Guatemala in 1992.

The pattern of kairos didn’t stop there, but manifest itself over andover in the ways staff became part of the organization, the ways faith communities in the north and south opened up to the calling and  process, and the ways the vision and mission of Sister Parish evolved into new life changing realities.

In the early days of Sister Parish only sparse, irregular communication took place among staff, who were primarily located in Central America.  Email did not exist for us and no one had a computer until much later.  Phoning was out of our league financially, and most staff had no easy access to phones.  And yet Sister Parish continued to evolve.   I was doing recruitment of sister parishes in the US, and Dick was making contacts with communities in Central America and on the east coast where he lived when he returned from his Guatemala home in Mezquital.

Both of us were Lutheran and had many contacts in the Lutheran Church, so that’s where we primarily found sister parishes in the beginning.  Each of those linkages were built on kairos for those open to seize the moments and allow them to break through the chronos of their lives – both in the south and north.

Kairos – moments and situations that break into our lives which transform us forever.  We all often miss  such moments and leave opportunities untouched, but the creation Sister Parish is clearly a bundle of kairos moments all tied together through 25 years by the common thread of the Spirit, who continues to lead and feed the vision, and prods our restless souls to walk into unknown ventures.  To God be the glory.

Building community across borders.
View all posts by sisterparishinc →
This entry was posted in 25th Anniversary, General and tagged 25th anniversary, Faith Lutheran. Bookmark the permalink.

3 Responses to Twenty Five Years of Memories: The beginning