Posted on August 8, 2013 by sisterparishinc

[This summer, Sister Parish hosted a delegation from the Center for Mission, which coordinates the global mission work of the Catholic Archdiocese of St Paul and Minneapolis. Michael Haasl, the Global Solidarity Coordinator for the Center for Mission wrote this reflection on that experience.]

In organizing a trip for educators to Guatemala, I wanted to include a time in Guatemala City to learn and understand more about the time of the violence in the 1970’s, 80’s and 90’s, and about other current issues of injustice.   I contacted Sister Parish, and when I explained what I was seeking, they graciously offered to receive our group and to take us to various sites to bring those realities more to the fore of our consciousness.

We met with the Archdiocesan Office of Human Rights, which in 1998 was headed by Bishop Juan Gerardi and had published the report “Nunca Mas!” which had found that 93% of the deaths in the 1980’s were by the military. We went to Mass at St. Sebastian Parish which was also the memorial site of Bishop Gerardi’s, who was murdered just two days after the publication of the report.  On the pillars outside of the Cathedral we saw inscribed thousands of names of the victims of the massacres.  We met with the Network in Solidarity with Guatemala (NISGUA), which accompanied those who gave testimony in the genocide trial of General Rios Montt, and who is now working with indigenous communities whose land is being threatened by potentially devastating pollution by mining companies from North America.

Finally we had an opportunity to witness the amazing work and pride of the local community organization UPAVIM (Unidas Para una Vida Mejor -United for a Better Life),  a group of women who have organized themselves to provide health, education and means of income for many families in their economically poor barrio of Guatemala City. The experience with UPAVIM was a tremendous sign of hope for our group.

My hope is that all of these up-close experiences with people working for human dignity and truth in Guatemala will enhance the possibility for solidarity-oriented education for North American students towards a world where all people are valued and honored, no matter their ethnicity, economic or social status. 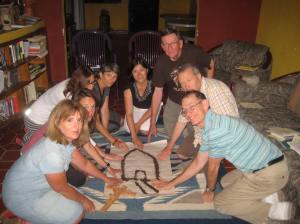 Building community across borders.
View all posts by sisterparishinc →
This entry was posted in Delegations, General, Guatemala and tagged delegate reflections. Bookmark the permalink.